Skip to content
HometechWhat is “picture drawn in code” that looks different for each browser you display?

“Pure.CSS” is a CSS framework developed by Yahoo!, and is popular because files are lightweight and responsive design. “Painting” drawn using Such Pure.CSS has become a hot topic when it looks different for each browser to display. This Amazing Image Made of Code Looks Based on Your Browser – VICEhttps://www.vice.com/en_us/article/a359vz/purecss-amazing-image-made-of-code-looks-different-based-on-your-browser Digital Artist Diana Smith He is known for his paintings inspired by baroque paintings. One of Smith’s major features is that Pure.CSS is not a real canvas or drawing software that he uses to draw paintings. The following page is a page published by technology media Motherboard that published works created by Mr. Smith as “web pages” When you open the link, you can see that the actual work was rendered on the browser based on the source code, not the image file such as JPEG or PNG. PureCSS Lacehttps://diana-adrianne.com/purecss-lace/’s work titled “PureCSS Lace” actually looks different for each browser you view. For example, when you open it in Chrome, you can see a painting with a lace spread behind a woman wearing a necklace, as follows:

When you view the source code, you can see that this painting was drawn by Pure.CSS code, not an image file.

When the same web page is displayed on Microsoft Edge, for some reason the woman’s necklace disappears, and the face of the overall smooth impression.

On the other hand, it looks like this when you open it in Safari. The ruffle of the race is displayed on the front, and the woman’s face cannot be seen.

In addition, the version released in 2014 of Opera will show paintings that look like Cubism. When viewed in Firefox, it became a painting that is quite similar to what was displayed in Chrome, but you can see that there is a clear difference in the color of the eyes and lips. The latest version was released in 1998, and Netscape Navigator displayed with almost no original ity. 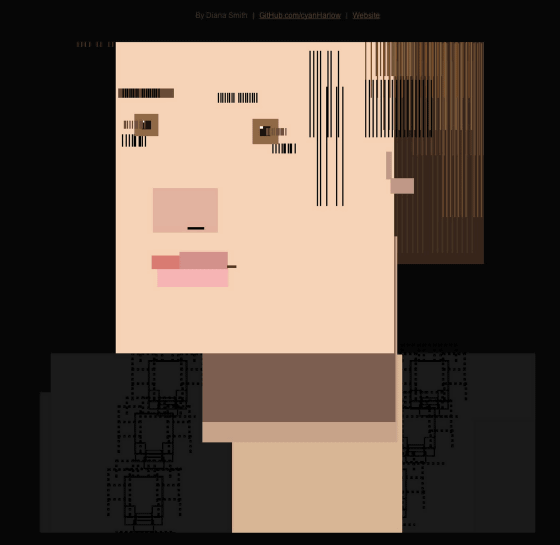 Regarding the fact that the appearance of his paintings varies depending on the browser displayed, Mr. Smith said, “Because of the artistic nature of this project, I am not interested in compatibility between browsers. So it’s going to look funny when you open it in a browser other than Chrome.” Mr. Smith has been producing paintings with Pure.CSS since 2018, and “paintings that look different for each browser” have been a hot topic before. The Ferocious Artist Singing in HTML/CSS Is Now Publishing His Work –